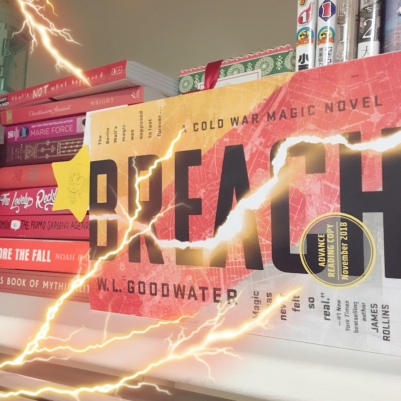 This is an Advanced Readers Copy so parts of this book can be changed before publishing with the quote at the end being included (there is still a whole page in italics lol).

A woman protagonist living in a world of misogyny and magic prejudice. This novel follows Karen, a magician working for the government who is sent to help a crisis on the other side of the world. With World War II having just ended, Karen is being sent to West Berlin without a clue of how many countries are on the brink of another war. She was expecting to help the government but what she finds will end up a lot bigger than just herself.

This tale of history and magic is a great read for all ages. I loved the strength found in the protagonist and how relateable it could be for women who have to fight to prove themselves. Breach is a great take on the Berlin Wall and the magical secrets that lie beneath.

The constant point of view switching to not only unknown but uninteresting characters was quite annoying. There was so much description at the beginning of each of these chapters that I was simply not interested in reading about these people and just wanted to rush back into Karen’s story.

The war politics. I was glad that I was actually watching the movie Pearl Harbor while reading this because I would have been twice as confused. I’m not the greatest history buff but the amount of countries that came together was so overwhelming. I do love that it is true to the times so any history lovers will love this tale of history and magic.

Magic actually being used by the government and the prejudice that came about after the war. This was such an amazing angle that I have never read before. I have seen a few anime but none have given it the justice that this book did. If you have even the slightest interest in magic and the mechanics behind it, this book is right up your alley.

Karen is such a strong female up against the world. Her witty come backs were always so fiercely charged that it gave me the fight to believe. It just hurt me that no matter how much Karen proved herself, there was always someone around the corner underestimating her. She fights in this book with so much power and focus that it is definitely an inspiration.

This is a great book with the theme of history and magic woven together to bring us a new view of the Cold War. I loved the idea of there being a breach in the wall and a great mystery behind it that we all must find out along with the main character. I’m always enjoying these rides that authors take us for and this one is no different. I definitely recommend grabbing this book if you see it on the shelf for it will definitely entertain you.

“‘Someone once told me that life is just an accumulation of memories and regrets.”

“The worst part is, the older I get, I forget about the memories, but those regrets tend to stick around.”