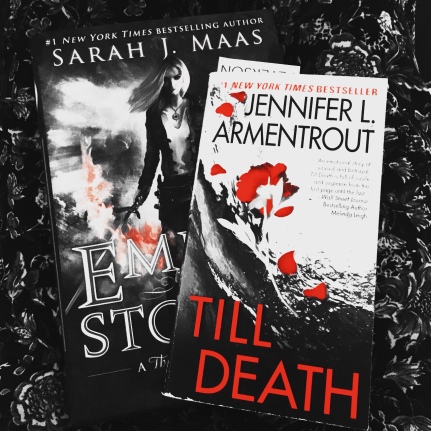 Ten years ago, Sasha was the only one to escape the notorious serial killer, The Groom. Now, she has returned to her hometown to begin a new life at her family’s Inn. But when Sasha gets threatened and a killer is on the loose it is up to Cole, an FBI agent, to save the day!

Okay, this is a little exaggerated but it pretty much sums up the whole book. I actually got this book from Bookcon, as well. I have it signed by the author, which is a favorite plus for me.

Little known fact: All of my signed books have a little sticker on it so I can easily find them.

The title pages had a little smudge on it pointing to the chapter numbers. Turns out they are rose petals. I just wish there was a little shading on them so I could have made that connection but this might have been the publishing’s fault.

Cole was way too blunt. He would just say whatever he was thinking and was way too truthful in everything he told Sasha. He also seemed to just invade her life which added to his bluntness. Also, they progressed so fast it was their second night being with each other that they practically did the deed!

I would’ve given this a 5 out of 5 if I wasn’t for how fast the sex and relationship progressed. I understand they had “10 years to catch up on,” but it was a little too forced to me. Especially the “Babe”s. Way too many of those.

Sasha and Cole make such a cute pair. Mainly Cole’s protectiveness and Sasha’s constant misfortunes. These two really meshed well and I guess their instalove did make sense. Their history was a little too brief though for such an intense relationship.

That ending! Holy moly that was a lot of suspense. The plot twist was slightly predictable but it was still enjoyable. I had my jaw dropped the entire time and just binge read until the epilogue. Then it got total gush fest with the power couple.

The mystery behind The Groom was so great to watch unfold. Everything that happened to Sasha was so constant that it propelled me to keep reading. Then the killings kept happening and I had to find out who the new Groom really was. A copycat? Or the real one? Who knows.

Click the link below to purchase this lovely book in all it’s glory.

Catch y’all on the next page!
-PM